Daniel Was raised in the North Valley of Albuquerque, New Mexico.

Growing up he started drawing at a young age, by the time he was in his teens he was Painting and drawing all of the time. He grew to know Sharon Higgins, Geri Larribas, Arthur Sussman, and other accomplished artists. Being exposed to these artists at a young age were good and bad. The good was the diverse knowledge and tips that he picked up from them, the bad was the feeling like he could never measure up to these great artists. When Daniel was in grade school he was drawing all of the time. In 5th  grade his parents gave him some books on the great master artists. Van Gogh, Matisse, Leonardo da Vinci were among his favorites. This just made him love to draw even more. He had mentors Miriam Sowers, and Arthur Sussman. They were just awesome, great influence for a young artist.

It was not until he was stricken down sick  that he started drawing seriously again. In 2011 he took an oil painting class at North Idaho College (his first class in art he had taken). From this point on he has been working in oil, Pastel, Colored pencil and Oil. Now he works daily on developing these skills. His love for nature is coupled with a light abstract influence from Van Gogh, and Arthur Susman.

He is also working in his original medium, “Pen and ink” he does amazing Portraits for hire. 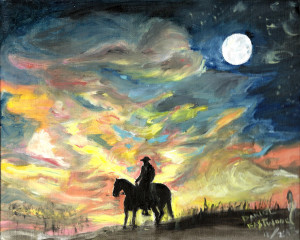 From the Artist: “What Arthur had said was true,” “Never stop painting,” The work you see before you is the work of my lifetime and I plan only to improve what I offer you, my public. Look around at what is here and if you have a specific topic or picture in mind, I will be happy to commission a piece just for you.